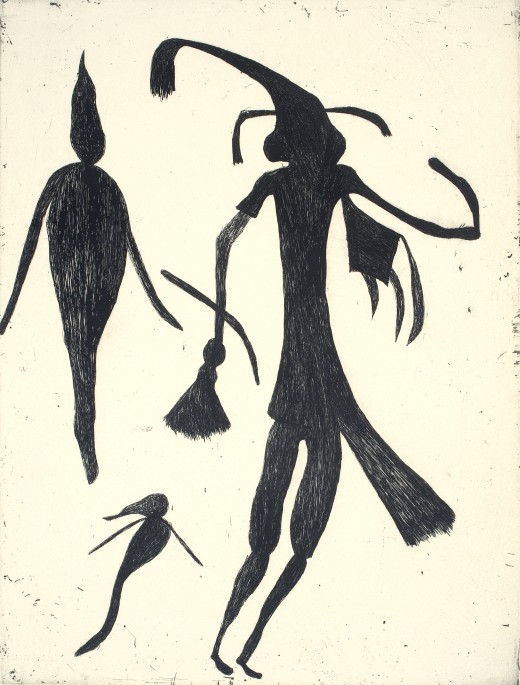 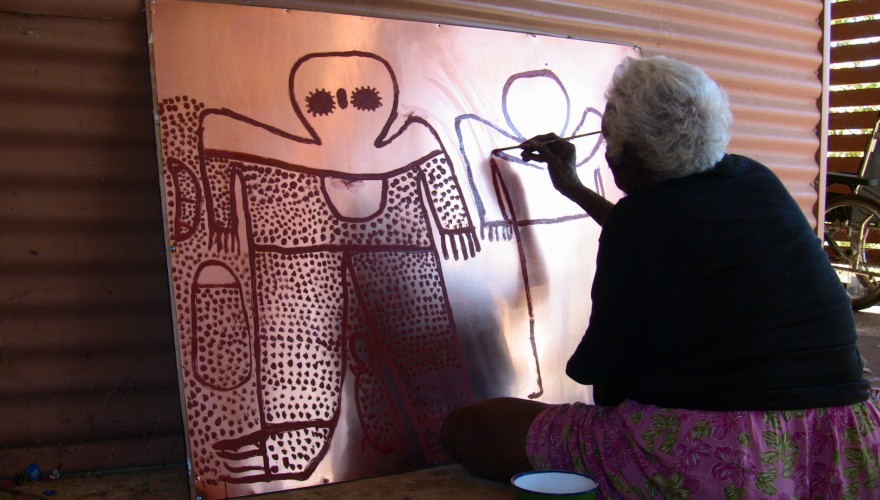 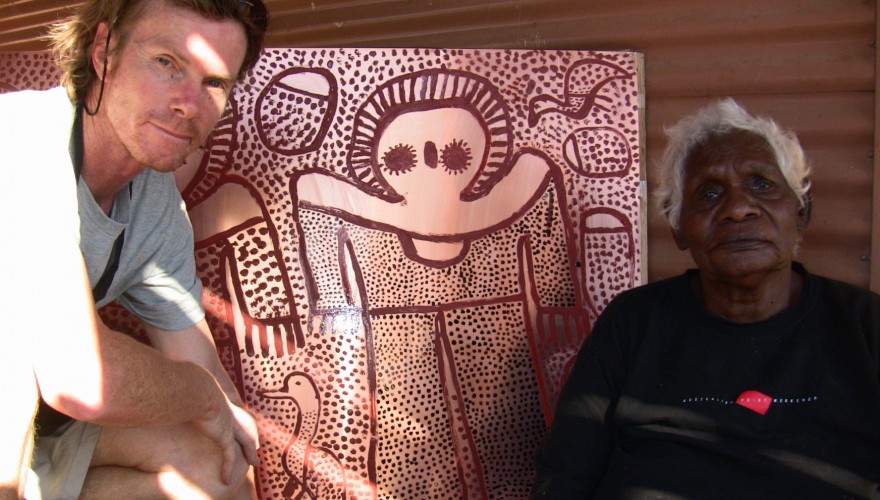 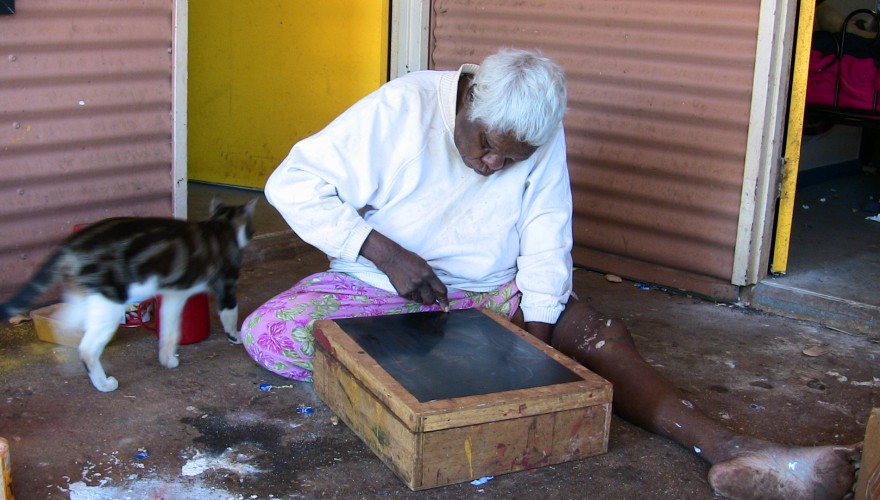 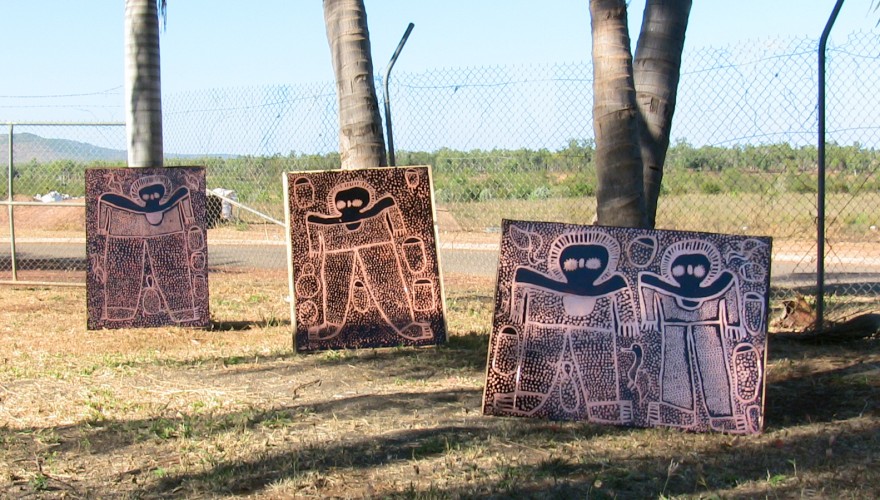 Lily Karadada's etching plates ready to be transported back to APW Melbourne from Kalumburu, Western Australia

Lily and Regina Karadada are members of one of Australia’s most important artistic families, who are renowned for their depiction of the iconic Wandjina spirit figure that is synonymous with the Kimberley Region of their ancestors.

Lily and Regina live in the small, remote community of Kalumburu, located in the north-western Kimberley Ranges in Western Australia. Kalumburu has a population of approximately 450 and is inhabited mostly by Aboriginal people from the Wunambal and Kwini language groups.

From her father's country, Woombangowangoorr, she travelled with her mother and family to the Mitchell Plateau. She married Jack Karadada and eventually settled in the small settlement of Kalumburu.

Lily is one of Australia's most important contemporary aboriginal artists. Lily is renowned for her depiction of the Wandjina image, a spirit figure of the North Kimberley region. Her paintings, carvings and prints utilise this potent figure, often surrounded by totems of turtles, bush turkeys, snakes or rock pools.

Lily has received many accolades for her artwork. She was awarded the Australian Centenary Medal for Contribution to Art in 2003.

Her artwork has been included in many important public exhibitions and has been acquired for significant collections including: National Gallery of Victoria, Art Gallery of South Australia, Christensen Collection, Museum of Victoria, Flinders University Art Museum, Artbank, Queensland Art Gallery and Berndt Museum of Anthropology.

While APW generally works with Artists in its Melbourne studio, this Fellowship project involved APW working away from the confines of its Melbourne-based workshop and transporting its expertise and equipment to outback Western Australia.

As the Karadada artists were elderly and were not in a position to travel to APW, or leave their community for an extended period of time, APW decided to establish a temporary ‘travelling print workshop’ in the community of Kalumburu.

Kalumburu is off ‘the beaten track’ - the nearest main road is the Gibb River Road, 270km to the south. Access from the nearest town, Kununurra, is a 10 hour, 4-wheel drive.  A small, single-engine plane delivers mail & essentials to the community twice a week and a fortnightly barge service from Darwin transports other supplies and larger freight.

As APW was undertaking extensive building renovations and refurbishments throughout 2009, it was an ideal time to send APW Printers offsite to engage in significant community ‘outreach’ projects.

The logistics of this project proved challenging as the substantial weight of the copper etching plates, paper and other materials required for the project had to be sent by road from Melbourne to Darwin, then on to Kununurra and then by air via the small mail delivery plane to Kalumburu. The larger items (such as the copper plates) had to be dispatched from Darwin by sea-barge into Kalumburu.

The artists worked directly onto the etching plates in Kalumburu.  APW Senior Printer Martin King delivered the plates to the artist’s homes where, under his guidance and assistance the artists drew on the plates. The plates were then partly processed in a large shed at the rear of Martin’s temporary accommodation in Kalumburu and then carefully transported back to Melbourne, where final processing, proofing and editioning took place.

The Australian Print Workshop Collie Print Trust Printmaking Fellowship afforded APW a rare opportunity to work on a highly ambitious and challenging project with two Indigenous Artists living in one of the most remote communities in Australia.

The Scholarship provided Lily and Regina with access to the technical skills and expertise of APW’s Senior Printer as well as provision of all the necessary printing materials. The Scholarship provided skills development for the artists, who learnt new processes to develop their imagery using printmaking. Working on copper plates, the artists produced a major body of work in the print medium.

While not the primary intention of the Scholarship, the project created potential for the artists to generate income from the sales of their prints. Given the lack of resources and employment opportunities available to the artists in their community, this outcome generated considerable impact for the artists and their families.

Works produced as a result of the Australian Print Workshop Collie Print Trust Printmaking Fellowship were presented in a major exhibition at APW Gallery in early 2010. This exhibition acted as a public showcase for APW’s Printmaking Fellowship, offering wider promotional and educational reach of this important program. The etchings resulting from this Scholarship also enabled broader exposure of the artists’ work and increased the artists’ potential to generate income via sales of their editioned prints. 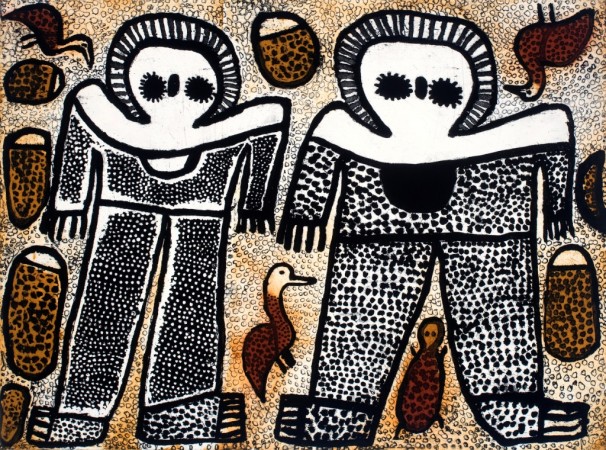 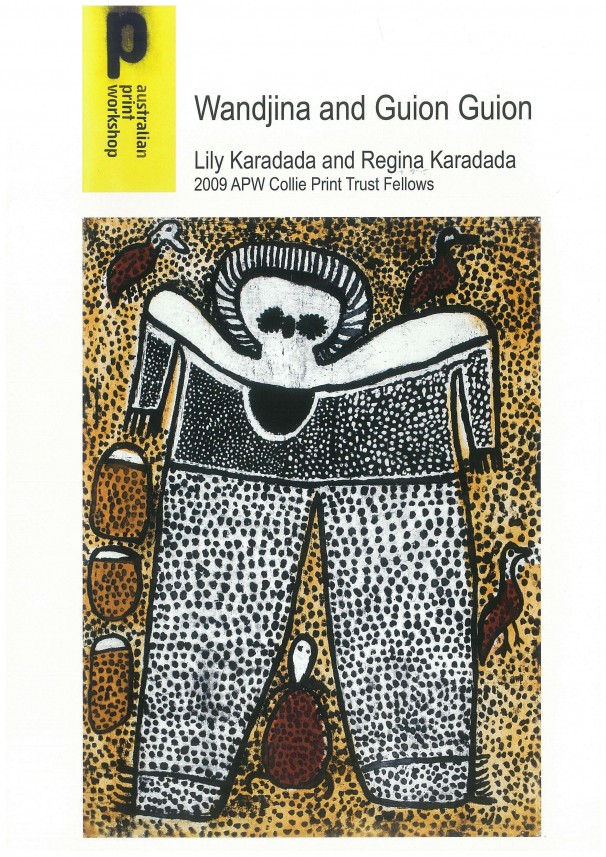