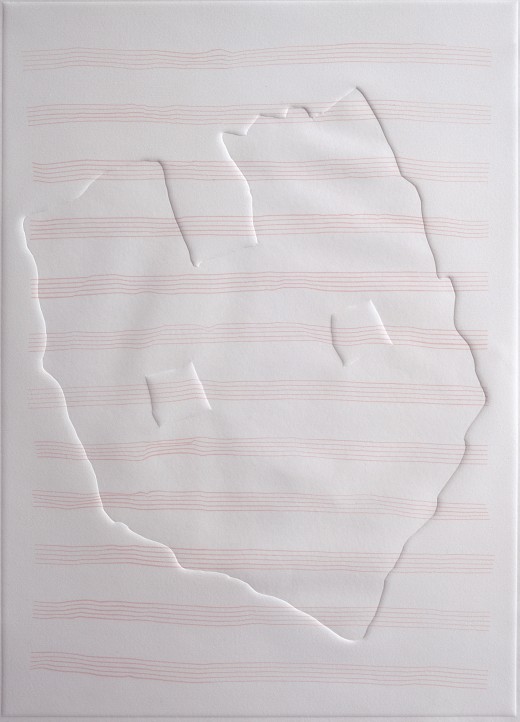 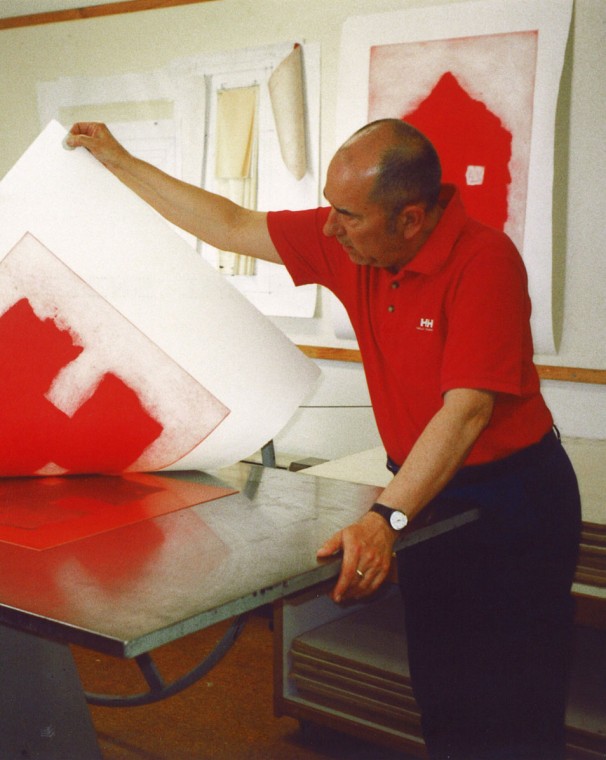 #1.
At last, the sheet music: Aleks Danko's Songs of Australia recast as scores. In seven sheets, the artist has caught the singsong of pragmatic creation which we repeat as we daily breathe in and out.

If we repeat anything enough times, we will believe it; if we repeat it even more, its substance will float away. Both states - belief and absence - are given to us as images in Danko's singsong. Both states are repeated through Danko's icons until they are as solemn as a brick wall. In the first print, a text which is a study in repeats and echoes, falls across a yellow page of black music staves, proclaims a title, and poses something like an axiom or a belief.

#2.
What is this belief? Simply, that a house can be sung into existence, that it can emerge from persistent rituals of work, leisure and sleep. This repeated mantra of the 8-hour day brings us to the state that we recognize as "home". In Danko’s world, this house is child's play: door, two windows, gable roof, a simple building block. It stands for The House of Mortgage, the House of Love, the House of Etc, etc. In the second print, the embossed paper shows the perfect house emerging from under the musical staves, from under the songlines, ready for us to imagine its occupation.

#3.
When we sing a house into existence, we make something out of nothing. The rush of bringing something into being is thrilling, exciting ("habit-forming" said Duchamp, somewhere in the last millenium). Here, Danko shows us some definitions. Note the fire and blood running through successive attempts at explaining the fever of creation. Note also in this, the third print, that the point of the house (pun intended) touches the word "impress", and that the house has literally made an impression on the paper.

#4.
At the same time as we sing, we realize that the whole rigmarole is an illusion. Through disasters, whims of government or our inattention, our home can be taken from us, can vanish or be crushed. When we realize this, we wonder why we were once so excited, we repress our memory of the singsong, and are tempted to throw the mantra away. In the fourth print, Danko shows us the lump of dense matter our dreams can produce when the weight of regulations crushes them, when the soul becomes heavy with words.

#5.
Despite the loss of innocence that the revelation of illusion provides, the house persists. In Danko's fifth print it floats upside down, a bit wobbly, washed out and wrinkled, having gone through some kind of disaster. "Crazy" is the artist's word for its state.

Despite the logic of theorists who can prove that our rituals are a sham, we still need a roof over our heads. We still need provisional mechanisms (another way of saying "illusions") to provide water, power, food, medicine, images, icons... so the singing persists, pink singsong lines over a shaken house, shaken and stirred but still on the page.

#6.
More song! Bright red! Blood! The west is red! So is the east! And the north! Also the south! In the sixth print, the house still bears the shaggy outlines of its loss of innocence, but it is upright. Not only is the house upright, but the song and the house are one: the staves are just as distorted as the house. In fact they have been right from the start, from print one. Even before Danko composed this particular singsong, the Laws of Music had already suffered some trauma.

#7.
As a coda, the page of text re-appears. Like the house, it bears the memory of being crushed. In the seventh print the text that appeared so fresh in the third sheet is back as a veteran, made complex by its easy existence in two dimensional and three dimensional space. The print’s title goes from sing to sang via tumult. It is a summary of Danko’s oratorio which goes from the present moment to the past and back again, from song to sang, from O to A, from omega to alpha, because singsong always goes back to the beginning.

#7a.
Another coda: the singsong is contrapuntal, not unison. This is visible through the overlay of different printing techniques, in which the harmony is mostly two-part, sometimes three, one kind of print over another. There is also the interplay of two and three dimensional image-making. Sometimes the images are graphic, sometimes photographic; sometimes they are both. The multiple dimensions are a memory of the interplay between the artist, Geoff Pinney the plate-maker and APW printer Martin King. 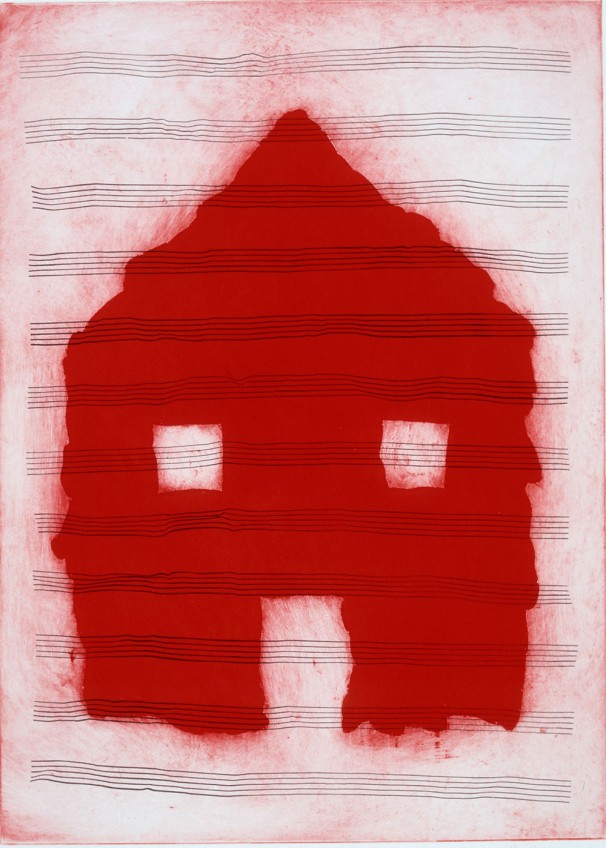 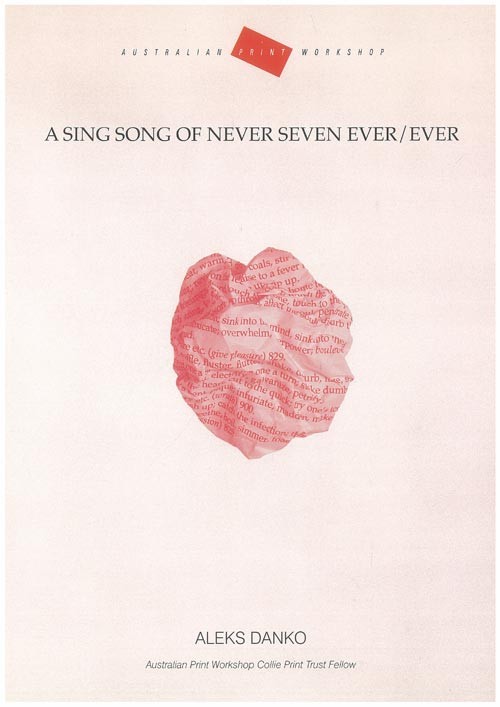