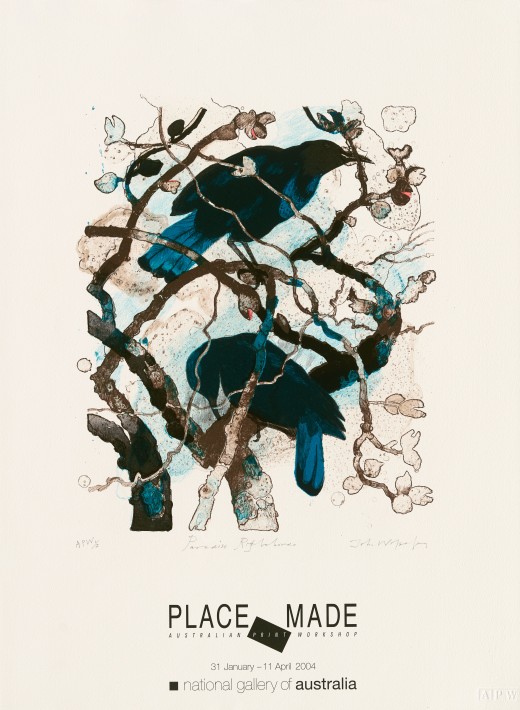 Australian Print Workshop's highly significant partnership with the National Gallery of Australia resulted in a collection of APW workshop proofs (covering the period 1981 - 2002) being acquired for their permanent collection.

To coincide with this significant milestone, the National Gallery of Australia organised a major exhibition that celebrated the Australian Print Workshop's achievements.

Australian Print Workshop Archive 2 (1981-2002) is now safely housed at the National Gallery of Australia. These significant works are now part of the national collection and are accessible and available for generations to come.

The Gallery’s collection of contemporary Australian prints is extraordinarily rich and by far the largest in the country and it has long been a priority to expand this collection by acquiring the Australian Print Workshop Archive 2. Negotiations spanned almost a decade before an agreement was reached in 2002 between APW Director Anne Virgo and her Board and NGA Director Brian Kennedy with the support of Gordon Darling; the archive was acquired for the Gallery with the assistance of funds from the Gordon Darling Australasian Print Fund.

Over 1,000 artists have used the facilities of the Australian Print Workshop since it was first established in the old Victorian Meat Market in North Melbourne in 1981, as the Victorian Print Workshop. Its skilled staff, technical excellence and innovative approach to printmaking has made the APW the ideal creative environment for artists such as Rick Amor, Fiona Hall, William Robinson, Akio Makigawa, Davida Allen, and Sally Smart to name a few.

The Workshop has been situated in inner city Gertrude Street, Fitzroy, since 1991. Under the directors John Loane, Neil Leveson and currently Anne Virgo, it has flourished. The APW is inclusive of artists embracing all styles of work, from realistic portraits to pixilated abstractions. There is no ‘house style’ and the prints produced by etching, lithography, wood and linocuts and other techniques reflect the diverse approaches of the artists. Some are already skilled in printmaking and independently access APW’s facilities, while others are guided by the expertise of the Workshop’s senior printers.

Major projects in which the Workshop has been involved range from the Australian Bicentennial print project of 1988; commissions to provide major hotels such as Melbourne’s Crown Casino and Westin Hotel with original prints for its guest rooms and public spaces; to the 50-metre-long Wurreka (meaning ‘to speak’) etched zinc wall mural by Judy Watson for the entrance to the Bunjilaka Aboriginal Centre at the Melbourne Museum. The Workshop has also been highly active in facilitating the production of prints by First Peoples Australian artists, particularly in remote communities and the promotion of Australian prints overseas.

The first major collaborative project between the Gallery and APW was the commission to print a number of etchings by Arthur Boyd. In 1975, Boyd gave a unique gift of 3,882 works to the Gallery, including paintings, prints, drawings and 147 original etched plates. These plates had been drawn and etched in London in the early 1960s and had never been fully editioned. They demonstrated the wide range of his work at the time. He had been working in a flurry of activity, usually just doing a few proofs before going on to the next image and often just turning the plate over to etch the other side.

Boyd wanted the Gallery to produce prints to help build the Australian Prints Collection through the sale of editions. In 1985 and again in 1987 the Gallery commissioned the then Victorian Print Workshop to print the editions, which included his Self portrait of 1962–63 and prints from the Electra series. The collaborative print project proved to be a remarkably popular project and a great success for the Gallery.

In 1987–88 the Gallery and the Victorian Print Workshop undertook an exceptionally ambitious project with the Australian Bicentennial print folio. Financed by the Australian Bicentennial Authority and coordinated by Roger Butler for the National Gallery of Australia, it involved commissioning 25 artists to create an original print reflecting on the bicentennial year. The folio set out to represent Indigenous and non-Indigenous Australian artists and to include works that reflect the multicultural nature of Australian society and gender equity. The folio drew artists from all Australian states and territories and includes the works of Banduk Marika, Sally Morgan, Nick Nedelkopolous, Hossein Valamanesh, Vicki Varvaressos, Barbara Hanrahan and Robert Rooney.

The Victorian Print Workshop was chosen as the partner in the production of these works, as the only print workshop capable of offering these diverse artists the necessary expertise and equipment. Each artist was flown to Melbourne where they had the workshop and a technician at their disposal for two weeks. After producing a screen, plate or stone to come up with a Right to Print proof to their satisfaction, the artists returned home and an edition of 80 was printed.

Some of the artists were already skilled printmakers, for others like Mike Parr it was their first experience with printmaking and one that would act as a stimulus to further experimentation with the print medium. Part of the strategy of the folio was not only to engage a wide variety of artists with printmaking and provide an impetus for print production by using the Victorian Print Workshop, but also to promote Australian printmaking both in Australia and overseas. Folios were given to Australian regional galleries that had large collections of Australian prints, for example, Newcastle, Ballarat and Geelong regional galleries. There were 25 international recipients, including The British Museum and New York’s Metropolitan Museum of Art, as well as gifts to national collections in Asia, India, China, South-East Asia and Latin America — facilitated by financial support from the Department of Foreign Affairs and Trade.

The production of the Australian Bicentennial print folio, embracing a diversity of artists as it did, became a stimulus for other similar significant collaborative projects for the Workshop including the Noel Counihan tribute print folio which followed in 1988, the Anti-Cancer Council of Victoria print folio in 1991 and the Australian Opera 40th anniversary print portfolio in 1997. In 1998 the Gallery was closely involved in the evolution of the Sydney 2000 Olympic fine art and again collaborated with the Workshop. Roger Butler was Chairperson of the committee for the selection of artists; Brian Kennedy launched the folio in 1998; Deborah Hart, now the Gallery’s Senior Curator of Australian Painting and Sculpture, wrote the catalogue; and the Australian Print Workshop produced Gordon Bennett’s lithograph Home decor (Counter composition) black swan and Fiona Hall’s photo-lithograph Bloodline for the folio.

Over the years the Department of Australian Prints, through the Gordon Darling Australasian Print Fund, has purchased many works from the APW. Of particular note are many Indigenous works, including the extraordinarily delicate lithographs produced by the late Kitty Kantilla/Kutuwalumi Purawarrumpatu and the remarkable etchings and linocuts by Tommy May Ngarraija and Butcher Cherel Janangoo.

The association between the Gallery and the APW has also taken place on a more practical, educational level. When Giorgio Upiglio, master printer with Milan based Grafica Uno, and Ken Tyler, American master printer and founder of Tyler Graphics, visited the Gallery to attend the opening of major exhibitions of their productions, both printers embraced the idea of conducting master classes at the APW. In 1989 Giorgio Upiglio presented a master class in colour etching to 12 invited artists and in 2002 a master class in lithography by Ken Tyler was attended by 20 artists and educators.

The friendship between the APW and the Gallery has flourished under the leadership of the current director Anne Virgo. Anne is well known to curators at the Gallery through her strong associations with contemporary art as former Director of the Canberra Contemporary Art Space. On several occasions Roger Butler has been invited to open exhibitions at the APW Gallery.

place made: Australian Print Workshop was exhibited at: